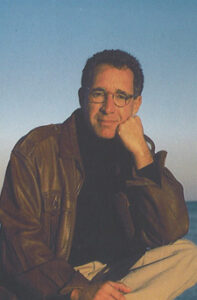 Laurence Shames has been a New York City taxi driver, lounge singer, furniture mover, lifeguard, dishwasher, gym teacher, and shoe salesman. Having failed to distinguish himself in any of those professions, he turned to writing full-time in 1976 and has not done an honest day’s work since.

His basic laziness notwithstanding, Shames has published more than twenty books, including fourteen volumes in his beloved and critically acclaimed Key West Capers series, which The Los Angeles Times has described as “funny, elegantly written, and hip,” and USA Today has called “as enjoyable as a day at the beach.” Shames has also authored non-fiction and enjoyed considerable though largely secret success as a collaborator and ghostwriter, having discreetly penned four New York Times bestsellers. These have appeared on four different lists, under four different names, none of them his own. This might be a record.

It was on an Italian beach in the summer of 1970 that Shames first heard the sacred call of the writer’s vocation. Lonely and poor, hungry and thirsty, he’d wandered into a seaside trattoria, where he noticed a couple tucking into a big platter of fritto misto. The man was nothing much to look at but the woman was really beautiful. She was perfectly tan and had a very fine-gauge gold chain looped around her bare tummy. The couple was sharing a liter of white wine in the middle of a sultry afternoon; condensation beaded the carafe. Eye contact was made; the couple turned out to be Americans. The man wiped olive oil from his rather sensual lips and introduced himself as a writer. Shames knew in that moment that he would be one too.

He began writing stories and longer things he thought of as novels. He couldn’t sell them.

By 1979 he’d somehow become a journalist and, with the help of a few lucky breaks, was soon publishing in top-shelf magazines like Playboy, Outside, Saturday Review, and Vanity Fair.  In 1982, he was named Ethics columnist of Esquire, and also made a contributing editor to that magazine.

By 1986 he was writing non-fiction books. The critical, if not the commercial, success of these first established Shames’ credentials as a collaborator/ghostwriter. His 1991 national bestseller, Boss of Bosses, written with two FBI agents, got him thinking about the Mafia. It also bought him a ticket out of New York and a sweet little house in Key West, where he finally got back to Plan A: writing novels. Given his then-current preoccupations, the novels naturally featured palm trees, high humidity, dogs in sunglasses, and New York mobsters blundering through a town where people were too laid back to be afraid of them. Highly cinematic, these books, beginning with Florida Straits, have been optioned over and over again for film; Shames has been hired and fired as a screenwriter frequently enough to enjoy a Writers Guild pension. None of the movies has ever been made. This is as much of a mystery as anything in the books themselves.