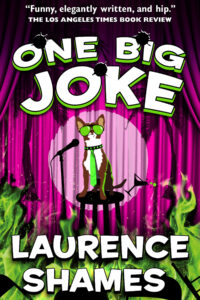 Does anyone out there remember the 1941 Preston Sturges classic, Sullivan’s Travels?

The protagonist of that wonderful film is a highly successful director of unabashedly escapist Hollywood comedies who wakes up one morning in an America on the brink of war and still struggling to emerge from the Depression, and decides that his work to date has been trivial, even worthless. Of what possible use are a few cheap laughs in such a serious and dangerous world?

Determined to experience real life and to find material for a much more substantial and socially useful film, Sullivan sheds his identity, empties his pockets, and hits the road as a hobo. A series of misadventures—some of them hilarious, most of them poignant—eventually leads to his being wrongly accused of a crime. Friendless and without resources to defend himself, he goes to prison. Some of his jailmates are hardened criminals; most are just desperate, downtrodden men whose luck has hit rock bottom. What all of them seem to have in common is an expression of hopelessness, alienation, misery, defeat.

Except on movie night, when the inmates are allowed to assemble to watch, of all things, cartoons. Sullivan looks on, rapt, as the mouse outsmarts the cat and the rabbit turns the tables on the hunter; but he’s not watching the screen, he’s watching his fellow convicts become human again as they begin to smile, then chuckle, then shrug off their sorrows and isolation to become a roomful of people roaring with laughter. In that moment, Sullivan realizes that his screwball movies have been of value after all, that the best gift he can give to a serious world is not to belabor it with yet more seriousness but to offer a bit of respite through comedy. (And don’t worry about poor Sullivan. There is a Hollywood ending.)

I mention all this as a way of explaining why the protagonist of One Big Joke, my thirteenth Key West Caper, is named Lenny Sullivan. It’s an homage, and the least I could do in exchange for borrowing Sturges’ once-again timely theme. With talk of nuclear buttons in the headlines and a general dispirited malaise in the air, it seemed like a good time to reflect upon the saving grace of comedy.

Not that my Sullivan is any sort of comedy crusader; he’s just an unemployed gag writer who channels his outrage into wisecracks. But circumstances keep arising—this is a caper novel, after all—that force Lenny into the quasi-heroic role of being the guy who keeps the laughs alive. A bullying businessman wants to destroy Key West’s only comedy club so he can develop its waterfront real estate. A very sore loser in a love triangle, who happens to be Mafia, wants to whack one of Lenny’s comedian pals. Can jokes and wit alone possibly carry the day against such driven, somber foes? More important, who will you be rooting for—the powerful and unsmiling, or the goofballs who insist that, however dark the moment, it’s still okay to laugh?