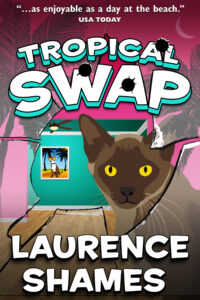 Writing novels is not the easiest thing in the world but it does offer definite rewards—for example, being read, hearing from readers, and getting paid. Those are the obvious satisfactions, but there are others as well that are less self-evident. One of these is the pure pleasure and privilege of sitting down to write an epilogue.

By the time an epilogue is called for, the often frantic and always complicated action of the novel has been resolved. The collisions of motives and desires that have created tension are in the past; the wreckage from those collisions has been cleared from the narrative road. The squeeze of time we call suspense finally relaxes, and both author and reader have the opportunity at last to exhale. To exhale and to contemplate the question that any decent novel should leave us asking: Then what happens for these characters?

If the reader doesn’t care enough to ponder that question, the novel has failed. The story has not persuaded; the characters have not become real people. But if the reader does care enough to want a glimpse, at least, of the characters’ future destiny, than an epilogue is the perfect payoff. The obvious analogy is to think of a novel as a meal and the epilogue as dessert; but since I personally don’t like desserts, I prefer to think of it as the glass of brandy you carry away from the table and over to the fireplace to savor reflectively and at total leisure.

The mind can run free when it comes to epilogues; epilogues have no rules. Novels do; or rather, every novel generates its own—a certain pace and tone that, once established, need to be maintained. But an epilogue allows that to be reset; it’s a completion but also a fresh start. Fifty or a hundred thousand words may have been lavished on events compressed into a weekend; an epilogue can bound through years or even decades in five pages. Marriages happen; babies are born; long-held secrets are revealed in passing remarks. Punks become mensches, or don’t; tough dames you didn’t quite trust might just turn out to be women you admire. In epilogues, justice is done and characters get what they deserve, which is just another way of saying they have the time and scope to become who they truly were all along, since we mostly carry our destinies within us.

But if writing epilogues is often the pleasantest part of writing novels, why don’t writers spare themselves a lot of grinding work and just write epilogues? Well, there’s the rub. An epilogue can only be as good as the novel that precedes it. The satisfaction it provides is proportional to how much we’ve been made to care about the characters and the outcome of the tale, and there aren’t any shortcuts to creating that kind of emotional involvement. So I guess there’s no help for it: the first 99% of a novel does have to be thought out, and struggled with, and written and rewritten. But it’s a nice incentive to know that, at the end, one will have earned the gleeful privilege of tapping out another epilogue and settling a few more destinies.