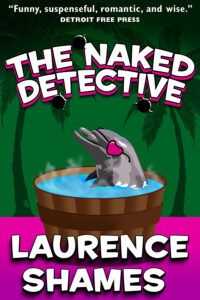 Like most writers, I think, I tend largely to forget about my own books once I’ve written them. This is fortunate, because if I kept my old stuff too firmly in mind, there’d be no way for new stuff to break through the resulting brain-clog.

It takes some external event to get me thinking about my earlier works, and one of those events has just occurred: Amazon is now running a 99 cent promotion on my next-to-most-recent Key West novel, The Naked Detective. So I’ve been thinking about that book this morning, and what do I recall? Mainly three things, definitely though not self-evidently interrelated.

The book was written under very difficult circumstances.

I had an almost indecent amount of fun writing it.

Reviews of the book were all over the map.

As to the first point, my then-publisher, Random House, had recently changed ownership and was in disarray. My editor had been fired and I knew I should expect no help, either editorially or with promotion. That was the bad news. The good news was that I knew I would be paid and the book was already on the schedule, so I could pretty much write whatever I pleased. I was free!

Thus, the second point. I wrote Naked first and foremost to keep myself amused. What I wanted to do was to dance a fine line between telling a traditional, straight-ahead detective story—something I’d never yet done—and writing a kind of affectionate spoof or, more accurately, a comic homage in which a clueless gumshoe would look less to reality than to the conventions of the detective novel in order to solve the crime. For Pete Amsterdam, my reluctant and rather chickenhearted sleuth, things unfold as they had to unfold, as they always unfold in PI stories. He trusts to the wisdom of the story itself—and whaddya know, he carries the day and ends up a bit of a hero.

This brings us to the question of the wildly mixed reviews. People loved Naked or they hated it, thought it was my best book or my worst book, thought it should be a movie or thought it should be tossed. There was very little in between. Why? The reason, I think, is that some readers intuitively grasped my dual purpose—traditional tale and screwball homage—and some did not. For those who didn’t, the book was just another so-so mystery—and frankly, read that way, it is just a so-so mystery. That’s the whole point of the joke. My detective doesn’t detect a thing, and he’d much rather be playing tennis, drinking wine, or listening to Brahms. Stuck with his first case ever, he just does what he’s read a detective should do, and things sort of fall into place. Chaos builds until it resolves into logic. Understandable cowardice is transformed by grudging stages into ambivalent but genuine courage. I happen to think the process is rather funny and, at moments, even touching. Pete Amsterdam is no Marlowe, no Spade, no action hero, just a guy who rises, albeit kicking and screaming, to a challenge.

Isn’t he just a bit like most of us?