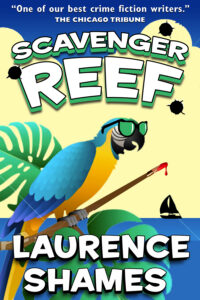 Some years ago, at a mystery convention called Bouchercon, I was asked to comment on what I liked best about writing novels. I didn’t really think about my answer; it just popped out. My favorite thing, I said, was bringing people back from the dead.

It didn’t dawn on me until much later that this was in fact the opposite of what writers of “crime fiction”—a category so broad as to be nearly meaningless—are generally known for. “Crime writers,” after all, usually specialize in bumping people off; sometimes the body counts get quite high.  Me, I hate killing characters. I don’t like to kill nice characters because I would miss them if they were gone. And I don’t like to kill mean characters because I’d like to give them a shot, at least, at redemption; failing that, I’d rather see them live and suffer as many defeats and humiliations as I can think of. And besides, if I kept killing off characters I’d have to invent new ones to take their place, and that would be a lot of work.

Then again, not killing characters is a far different thing from bringing characters back to life. I’m talking now about resuscitating folks who’ve actually been dead, or at least presumed so. Call me sentimental, call me unresigned—I have a tough time reconciling myself to the notion that dead characters need to stay that way. It’s bad enough that death, in real life, is generally final. Why does it need to be that way in stories?

The first time I brought a character back to life was in Florida Straits. In that instance I had a good excuse. I needed a character who was retired from the Mafia. Inconveniently, one can’t retire from the Mafia, since the Mob oath famously proclaims that one joins the Cosa Nostra living and leaves the Cosa Nostra dead. Ergo, I needed a guy who’d died—even very briefly; say, before the medics shocked him back to life in an ambulance near the courthouse steps. That way he could quit on a technicality. This mafioso Lazarus was Bert the Shirt. Bert survived his death virtually unscathed; the only lingering effect of his flat-lining was that he’d mysteriously lost the ability to carry a tune.

Without quite realizing that I was following a motif (or maybe an obsession), I brought two characters back to life in my second novel, Scavenger Reef. I can tell you about one of these but I can only tease about the other, as it would be too much of a spoiler.

The one I can tell you about—it’s revealed in the flap-copy of the print edition and the metadata of the download—is the book’s protagonist, the artist Augie Silver. Augie was loosely based on a dear friend of mine who had died the year before. To put it simply, I was really pissed off that my friend had passed away and I badly wanted to believe it wasn’t so. So I turned to Augie as a proxy. I put him through a terrible sailing accident—an accident that surely no one could survive. Except, unbeknownst to anyone, he does. Weeks later, bedraggled and ghostly but very much alive, he returns to Key West to find that much has changed in his absence. His “death” had left a hole in the world, and the world had poured in to fill it. Now he has to battle like crazy to reclaim and preserve the life he’d briefly vacated.

Augie stayed dead for thirty or so pages—admittedly, an uncomfortable length of time to be deceased, but at least I knew all along that he’d be coming back. The case of the other resurrected character (for convenience I’ll refer to her as “she,” though I’m not promising anything regarding gender) was somewhat stranger. She was dead for the entire time between the first and second drafts, and I truly thought it was forever. I really liked and admired this character and I was weeping when I had to kill her. But the story seemed to demand it; there had to be a sacrifice of equivalent weight to Augie’s eventual triumph.

Fortunately, my editor was even more upset than I was at this character’s untimely demise. He argued that the gesture of sacrifice, the willingness to die in someone else’s place, was enough; she didn’t actually have to perish. We argued back and forth, pretending that the question had to do with symmetry and structure when of course it was all about yearning and emotion.

In the end, we decided to un-kill her. For me, this was a tender and fascinating process. Revisiting the character, I saw things I’d under-appreciated about her or passed over too quickly. I felt a kind of wistfulness that was not so different from the regret one feels at having missed opportunities to get to know a real person who had died. Except that, in fiction, there was something to be done about it. I could raise her up again. I could breathe life back into her. Is there a greater privilege and a greater joy in writing stories?