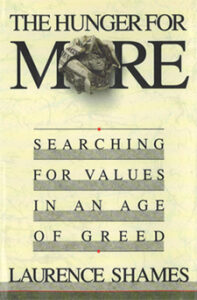 Hairstyles change. Gizmos come and go. But what about the essential things—things like human nature?  I’m not so sure the basics really change at all.

I thought about this the other day, while reading an Op-Ed piece by a Goldman Sachs executive who’d just quit in disgust at the moral deterioration of the firm. If you’d just arrived from Mars and read that diatribe, you might imagine that human greed had just been invented, or that professional disillusionment was a brand new thing, or that this tormented banker was the first person to have had a “successful” career that proved at the end to be devoid of real meaning or satisfaction.

In point of fact, the banker was telling a very old story; but one in which each generation provides its own wrinkles and details. By coincidence, I myself had written a quite similar if less personal story, on the same Op-Ed page in The New York Times, in 1987. Remember 1987? There were no cell phones, no Internet, no Google. People sent faxes and did research at the library. Yet greed was already alive and thriving. So was the empty feeling that goes with greed. So was the tragic confusion between what we glibly call “success” and what truly constitutes a well-lived life. That, really, was the focus of my little essay—how our culture had cheapened and perverted the ideal of success.

I wrote the piece; I got it off my chest; I thought that was the end of it. Then the letters started pouring in—people thanking me for articulating something that was on their minds as well. Then the book editors began to call. The essay, they thought, hinted at something broader—some crisis in our values. Americans always seemed to want more. Why? Was it in our DNA? Was it part of our history? Were we victims of our own commercial propaganda? Would the craving for the next raise or the next bonus ever end? If it didn’t, how could anyone be truly happy?…Had I ever considered writing a book about this stuff?

Truthfully, I hadn’t. But I did. The result was The Hunger for More. It was originally published in 1989; I’ve decided to re-issue it in e-form for the simple reason that it still applies. Change some names, add a zero or two to the size of our greedy ambitions, and the book could come straight from today’s headlines.