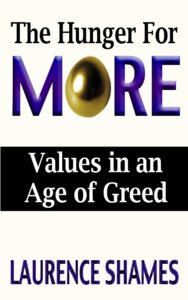 It has long been a point of pride with me that the Wall Street Journal hated this book.

Their commentator attacked it with gusto; but the attack had nothing to do with literary matters and everything to do with ideology. On the basis of a convenient misreading, the Journal reviewer accused me of the fatal sin of being anti-money, and put me in the tradition of “righteous killjoys” who tell the wealthy why they shouldn’t enjoy their wealth. Also included among this imaginary conspiracy of grumps and grouches was Henry David Thoreau. I couldn’t ask for a higher compliment.

Just for the record, though, I am not anti-money. I think money is swell and I wish that I, my friends, and everyone in general had more of it. But The Hunger for More is not a book about money; it’s a book about values—which is really just a fancy way of saying the choices people make. I’ve decided to re-release it—some twenty-three years after its first hardcover publication in 1989—because I believe its messages are even more timely today than they were at the close of the go-go ‘80s.

In saying this, I am not making any sort of claims to prophecy.  It’s just that things have a way of going round and round, and the present moment is a lot like 1989, but more so. The 1980s saw a boom that ended in a bust; so did the 2000s—except this time the bust was broader and deeper, the promised recovery more elusive and uncertain. During both sets of flush years, business was in fashion, greed was tolerated and even glorified, and success was measured mainly in dollars. When the respective bubbles burst, business was in bad odor, greed was excoriated, and success was measured…how?

That’s the question, more than any other, that this book seeks to address. To put it very simply, how can we feel good even when the economy is bad? How can we reckon the progress of our lives if not in pay raises and promotions? How do we maintain our optimism and self-esteem while being clobbered daily by dim reports about our prospects?

Money is swell but it’s fickle. The economy is out of our control—out of anyone’s control, apparently–and therefore can’t be trusted. These are hard truths that most of us learn at some point in our lives, but that the current generation of young adults have had their noses rubbed in from an early age. To them I dedicate this reissue of Hunger for More, in the hope that it will be read not as some abstract (still less killjoy!) document, but as part of a sane survival strategy for dicey times. Why define success in terms of wealth and job title when those things can be taken away? A version of success based on personal values, responsible choices, service to others, and creative fulfillment is both a safer and more joyful alternative.