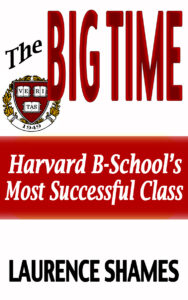 Back in 1983, when I was the Ethics columnist at Esquire, I got a call one day from an editor at the estimable publishing house then known as Harper & Row. She asked me if I might be interested in writing a book for them. I said yes. She said, “Don’t you want to know the subject before you agree?”

It really didn’t matter. At that moment I would have agreed to write a book about goats, neuroscience, rugby, rutabagas–absolutely anything. I’d spent the previous six months looking for a book idea. During that time I’d had some two dozen lunches with editors, all of which followed the same pattern: Polite chit-chat as a warm-up; industry gossip once we’d gotten comfortable; then, over espresso, that heartbreaking moment when the editor looked hopefully at me, I looked hopefully at the editor, and we realized simultaneously that neither of us had brought a viable idea to the meeting.

Not that I hadn’t had notions of things I’d like to write. But a notion is something that amuses you for half an hour, whereas a book idea is something that needs to hold your interest for a year or more; and besides, my notions tended to be goofy. The editors’ notions, on the other hand, tended to be dry, solemn, imitative of some thick volume then-current on the bestseller list. Not for me.

So I held my breath and waited to hear the editor’s idea: A sort of group portrait of the most successful class ever to graduate from Harvard Business School. At once I felt…ambivalent. A group portrait meant characters. That part I liked. But Harvard Business School? I myself was not an Ivy League type. I knew little about business and had never once read a “business book.” For that matter, I was not a big fan of American-style hard-knuckled capitalism. I made what I considered necessary disclaimers regarding those deficiencies; the editor said that in fact they were excellent qualifications, and so I wrote the book—which I have just recently decided to re-issue in e-form, and that will come available within days.

Why now? I think that’s best explained through the new Preface, appended below. Please have a look. Thanks for visiting.